The girls come and go from childhood with its casual cruelties, as teenagers do, with Taylor Blim (who plays #2) especially adept at that navigation, as is Sarah Price (the geeky #11) and Angela Alise, who quietly keeps goal until, like all great keepers, she figures out with a roar that there is more to life than playing constant defense.

*I was awarded the Second City and NBC Universal Bob Curry* Fellowship!

THE SECOND CITY AND FELONIUS MUNK’S

NOTHING TO LOSE (BUT OUR CHAINS) – WOOLLY MAMMOTH THEATRE

“Alise is marvelous, especially as Munk’s mother, who caps the first act with a spirited song beseeching her son to apologize for his wrongdoings.

“The finest work the busy Second City has done in DC”

“He says some rough (and apparently true) things about his mother, but then as his mom, Angela Alise, gets to push back fiercely.”

“Angela Alise shines as Munk’s mother, a teenager with a decision to make and then a woman who knows her son resents her. She has strength in both body and voice that commands the stage. She also closes the first act with a powerful singing voice with hilarious lyrics. “

“Directed by Anthony LeBlanc, Munk and his four ensemble members (Angela Alise, McKenzie Chinn, Calvin Evans, and Odinaka Ezeokoli) keep the verbal tête-à-têtes lively, with actors popping out above or from the wings to add their bits of commentary.

“You should find your way to Woolly Mammoth, for you have nothing to lose but your chains” 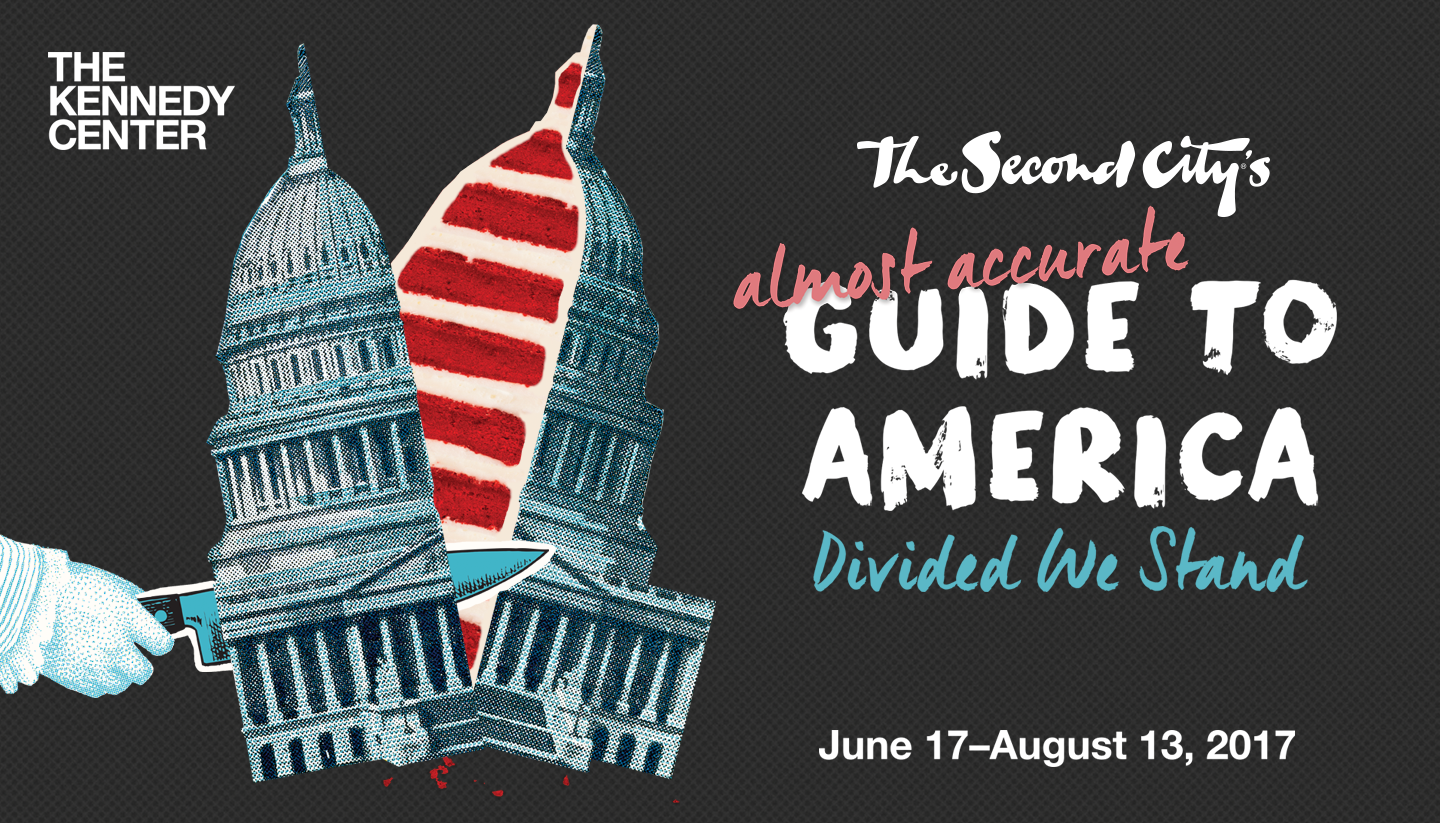 “This is why we lost,” Angela Alise declares at a junction that is pointed and hilarious. Alise is awesome slinging race-based trash talk as she plays the sister of Tyler Davis’s character — black siblings watching a Cubs-White Sox game with Ross Taylor and Chucho Perez as nonblack friends acutely tongue-tied by the jibes. And while the group still excels at drive-by potshots (look out, Fox News), this show has some unexpectedly pensive passages. A ginger blind-date skit is almost breakable in its vulnerability, and Alise and Asher have monologues that challenge audiences to listen and empathize.

Divided We Stand delivers enough laughter to lighten the sultriest evening, thanks to its talented ensemble of writer-actors and a creative team that knows how to magnify a joke. Angela Alise opens the show with a wonderful depiction of ‘Black Heaven.’ A strong actor and singer, she is both funny and moving as she plays a young woman on a first date.

How do you talk about being black in America? Through baseball, of course. Or the description of a black heaven, where everyone treats you “like you are sexy and you matter.” Alise carries the torch on these fronts, bringing such smooth intelligence to the conversation it feels almost sinful to laugh at her performance.

“Angela Alise serves up so much originality to her Addaperle (the good witch of the north). Alise could easily have her own sitcom. “

This warm revival is long on campy  humor, with emotionally strong vocals with some of the most innovative and finely executed choreography seen in a non-Equity musical in years. Kudos to Breon Arzell. Lili-Anne Brown’s casting is superb as she found several talents such as Nicole Michelle Haskins (Evillene), Frederick Harris ( The Wiz) and Angela Alise (Addaperla) to round out her cast. You’d be hard pressed  to find a stronger and more talented cast than the nineteen players found here!

“Fans of this piece surely will enjoy all of the energy and talent on display here. As small, nonunion musicals in Chicago go, this one is uncommonly well-sung, and the room is full of heart and joy. Even though this big cast is crammed onto a small stage at Theater Wit (musical director Jimmy Morehead’s musicians are up in the balcony), it’s all a lot of fun, especially once Frederick Harris gets fired up as the Wiz and Angela Alise starts to flash as Addaperle. “

THE SECOND CITY’S BLACK SIDE OF THE MOON –

(The Black Side of the Moon Ensemble was one of the first all African American casts at Second City, and the production was the best selling show in Woolly Mammoth’s history.)

“Each member of the cast brings their own brand of showmanship to the production.”

“Angela Alise raps history lessons with a righteous fury that’s as funny as anything all night; the cast feels like a balanced team.”

“Angela Alise, is one of the strongest actors in this production. The fact that she can make a Popeyes menu sound both ominous and hilarious is just one example of her talent.”

“Each of the performers has their moment to shine, whether it’s Dewayne Perkins and his “Broadway DJ” sketch— which speaks volumes to the level of theatrical education and awareness among theatergoers in the audience — or Angela Alise’s rap-battle throw down about refusing to accept white-washed history, everyone has a moment for which they become remembered in the production.”

“Second City’s proactive, edgy and downright hysterical Black Side of the Moon at Woolly Mammoth Theatre is an honest conversation about race and gender in America. Using comedy and spoken word, this sketch show mixes astute societal observations with original skits. All of this is done under the banner ‘We are not a monolith,’ a powerful post-election message. Black Side of the Moon may be uncomfortable for some and a welcome experience for others. However, its use of humor cannot be understated. ‘We are not a monolith’ may be the show’s message, but the experience of laughing together can be powerful instrument in healing a divided country.”

HOW WE GOT ON – HAVEN THEATRE

“The trio’s sweet coming-of-age narrative is given a beat by a DJ referred to as Selector (Angela Alise), a kind of benevolent spirit of hip-hop who literally watches over them in Jess McLeod’s winsome production for Haven Theatre.”

“Guided by Selector (Angela Alise as the professor of cool) with the mechanics of beat-making built into its structure, “How We Got On” is as resourceful as it is soulful, as it is truthful, as it is wonderful.”

“Scenes between the characters are mixed with lessons in rap history, recording technology, and philosophical musings from the Selector (Angela Alise), the story’s narrator and Godlike compiler. Alise makes the role of Selector fun and powerful, and deftly switches characters and codes as she voices the teenagers’ fathers and other secondary characters.”

“Angela Alise sets the tone as the narrator. Upon arrival, we are greeted by Alise already spinning tunes. She is the knowledgable guide to the past. Throughout the show, Alise inserts nuggets of info and zesty zingers. She also distinctly plays each of the kids’ fathers.”

THE HOUSE THAT WILL NOT STAND – VICTORY GARDENS THEATER

“It is rare to find such a BOLD VISION, staged with FEARLESSNESS
and insight by such a TALENTED ENSEMBLE.”

“The middle daughter, aptly named Maude Lynn, has turned to religion for solace & self-fulfillment, seeking a martyrdom that will satisfy her soul without too much agony. Angela Alise goes beyond the stereotypical self-righteousness of her role to express the love for her family and the hopes of youth that lie beneath her rigid exterior—ultimately, she is looking for her place in the world as much as her more (or less) conventional sisters.”

“Rush (playing Riley) and Angela Alise (as the Franks’ housekeeper), join for a scorching rendition of “A Rumblin’ and a Rollin’,” in which they bitterly observe the interest of northerners in the case of a white man.” Read More

“Angela Alise plays Gladys, the good Christian girl with a talent for writing and a secret desire, with dignity and strength. Her confession of love to Leanne (a lovely, capable McKenzie Chinn) is the play’s finest moment. The scene is filled with love, pain and a measure of hope that audiences will remember long afterwards.”  Read More

“Angela Alise Johnson conveys the volatility of youth as the artist’s forbidden love interest, navigating the complications of a relationship one minute and fighting over oranges and candies the next.” 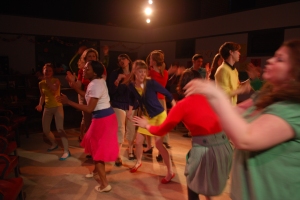 “Palmer’s more than able cast easily holds their own through all Church’s tangential swerves & comic detours. They are brilliant at exposing faith as the ephemeral and potentially dangerous thing it is”

“Here we’re in a spot-on re-creation of a church rec room (scenic designer Michael Mroch clearly knows his stuff), being addressed by four visiting reverends (Janeane Bowlware, Carrie Drapac, Angela Alise Johnson and Robert L. Oakes) who offer prayers, sermons and song. The tone of the praise service is exactly right even as its content veers into absurdist territory, with one character testifying in hallucinatory detail about her substance-abusing past and another warning of the danger of mummies. Like Pullman’s cast, Church’s performers play their roles with deadpan conviction.”

*Church and Pullman, WA,  received a 4 Star Review from Time Out Chicago and the production of the two Young Jean Lee plays made their Top 10 Plays of 2011.